At its height, the textile industry employed up to 25,000 people in Troyes

Troyes dominated the knitwear production industry in France for more than a century, manufacturing items such as stockings, socks and undergarments. While major names such as Lacoste and Petit Bateau continue this tradition today, the “knitwear city” owes its reputation to a unique specialism that comes straight from the golden age of textiles, for Troyes is now known as the European capital of brand outlet centres. These outlet centres were once known as “factory outlets”.

The textile industry employed up to 25,000 people in Troyes…

The figures are staggering and scarcely believable. At its height, the textile industry employed up to 25,000 people in Troyes – equivalent to one third of its population at the time. This pinnacle came in the early 1970s, when Troyes was awash with workers pouring out of the factories on their bicycles at the end of the working day. In summer, Troyes became a ghost town as its hosiers vacated the city for their summer break all at once, heading for the seaside or the mountains. For the rest of the year, however, the city was a hive of activity as the workers filled vast workshops that rivalled the Chinese factories of today in size.

The French capital of the hosiery industry felt the impact of globalisation long before other cities. The industry began its decline in the 1980s, following a series of outsourcing campaigns, redundancies and factory closures triggered by stiff competition from low-cost countries. It was a steady decline, with no noticeable peaks and troughs, which was almost accepted with resignation. Yet it was a brutal process for those men and women swept away by the tidal wave of globalisation.

In fact, it is a miracle that Troyes survived to this day, and that Troyes lived through this economic earthquake that would bring other single-industry towns and cities to their knees. Yet the ancient city managed once again to pick itself up and carry on, just as it had after the great fire of 1524 that wiped large parts of Troyes off the map.

However, those companies with the most solid foundations – such as Devanlay and Lacoste (which are now one entity) and Petit-Bateau – were spared the ravages of this industrial decline. Troyes also had the foresight to shift its economy to trade and retail. The city’s DNA contains vestiges of the past, when Troyes played host to medieval fairs that drew in vast numbers of international merchants.

The hosiery industry still employs 3,500 people directly in the city, and Troyes remains a leading player in the textile sector. These workers keep alive the city’s ancestral know-how – the very same expertise that gave Troyes its reputation as a highly skilled, professional and industrious city.

The hosiery industry in Troyes: a potted history

From the 12th century onwards, the people of Troyes were weavers, drapers, dyers and launderers. The term “hosiery” (in French, bonneterie) was not used officially until 1505, when a hosiery guild registered its articles of association. The word bonneterie first appeared in France in the 15th century. It comes from the word bonnet, which signifies a haircut. It is also the term used to refer to the art and trade of the worker, the finished article itself, the production factory and even the retail outlet. In Troyes, the industry began with the manufacture of bonnets. Stockings came at a later date.

Legend has it that a pair of stockings made in Troyes was the last garment worn by King Henry II of France. He wore the stockings to the wedding of his sister, Margaret of Valois, on 10 July 1559. He died on the same day. Three centuries later, Queen Victoria would go on to source her stockings from Troyes.

The first factory – if such a term can be applied retrospectively to a clothing and knitwear mill – opened in 1630. The factory employed the “able-bodied poor”.

Another factory, which opened in 1746, was the first to employ dedicated cotton stocking looms. It provided a source of work for poor or abandoned children, known as the “blue children” because of the colour of their uniform. This was the trigger that gave rise to the hosiery industry in Troyes.

Over time, the hosiery industry – or more specifically the stocking production industry – replaced weaving in the Aube. In 1846, there were some 10,800 knitting looms in Troyes and the Aube, spread across a vast network of workshops. The specialist expertise that the city possessed was honoured at the Great Exhibition of London in 1851 and the Paris Universal Exhibition of 1867, where the Aube hosiery industry collected a vast haul of gold medals.

In 1903, Troyes accounted for more than half of the hosiery industry in France.

In 1930, there were more than 300 knitwear factories and workshops across the conurbation. One company alone, Mauchauffée, employed up to 3,000 people. It was a time of great dynasties, with the industry dominated by the likes of the Valton, Gillier, Poron, Vitoux and Lebocey families. A group of around 20 families would go on to dominate the local economy for generations, before being swept away in the tide of globalisation.

Family traditions were also established on the factory floors, with sons following their fathers and daughters following their mothers. In fact, it was an industry dominated by women, where more than half of the workforce was female (61% women in 1921). As a result, Troyes boasted the second highest proportion of employed female residents in France.

Some three quarters of the city’s women were in work, a figure two times that seen in the rest of the country. The city’s women enjoyed a level of emancipation not seen anywhere else. And with this emancipation came self-confidence. By bringing a second income into the home, their families enjoyed a better quality of life and extra protection against unemployment.

Yet Troyes produced much more than clothing. Looms – both straight and circular – and needles were manufactured in the city. The dyeing industry was also a prominent feature, with dye shops dotted across the city. Troyes’ workshops were filled with cotton, wool and silk fibre spinners.

The hosiery industry moved with the times, keeping pace with technological revolutions and responding to competition from abroad, and from England and Germany in particular. Inventiveness and creativity were heavily prized assets that companies needed to stay ahead of the game. In Troyes, however, unlike elsewhere, this fast-paced rush to modernise focused on quality, luxury and quantity.

The two great wars of the 20th century had a major impact on the city’s industrial landscape. Rayon, known in its early days as “artificial silk”, replaced cotton after the First World War, while nylon replaced rayon after the Second World War. Henceforth, synthetic fibres dominated.

In the late 1950s and early 1960s, the Aube economy diversified further with the arrival of major manufacturers such as Michelin, Kléber and Petitjean, which would break the monopoly thus far enjoyed by the hosiery industry and signal its eventual decline.

Wool broadcloth, which arrived from Flanders, was used to make warm, thick clothing. The Italians brought an array of spices and war-horses. Expensive furs were imported from Germany, while Spain provided a rich source of high-quality leather. Other products came from Asia, Africa, Russia and elsewhere. There are even records of a roaring trade in women captured from the Saracens.

These merchants attracted hordes of minstrels, prostitutes, animal exhibitors and pickpockets, along with a thriving community of exchange agents and bankers.

The Troyens accumulated vast wealth from taxes and tolls. Along with this free movement of people and goods came the free movement of ideas, and art and culture spread rapidly, triggering something of an intellectual renaissance in the city. The city was home to a stunning courtyard.

This golden age lasted for around 150 years, before a series of unfortunate circumstances conspired to herald its demise. There was a growing trend for goods to be shipped directly from country to country without the middleman. A conflict with France saw the Flemish people stay at home. The Italians began to manufacture cloth and textiles to meet their own needs. Competition from Paris and Lyon became increasingly intense.

To make matters worse, the king increased taxes when Champagne fell under the rule of the French crown. The Hundred Years’ War was the final nail in the coffin, signalling the demise of the Champagne Fairs . Was this the very end of these world-famous fairs? Not quite!

Troyes: the birthplace of hosiery

The vast crowd packed into tight rows alongside the cortège had eyes for one woman only. Perched on top of her Venetian gondola chariot, she made her way triumphantly through the streets of the city. According to newspaper reports from the time, 30,000 Troyens came out to cheer her. The royal vehicle was towed slowly along by seven horses. Earlier that morning, she had been crowned at the town hall by the mayor himself. A carriage awaited her, standing beneath a canopy erected specially for the occasion.

The Prefect hosted a reception in her honour. She looked radiant in her vast red velvet coat, lined with white satin and decorated with ermine fur, placed atop her satin dress. Her tiara, bearing the coat of arms of Troyes, sparkled on her thick hair. She was escorted by 20 chariots, 300 horses and 1,200 onlookers. The cavalcade also retraced the steps of King Henry IV of France, as he made his way to “the good city of Troyes” back in 1595.

It was her moment of glory. She was the star attraction of this great parade, the first queen of the first hosiery festival. The date was Sunday 12 September 1909.

Yet this young queen, just 21 years of age, was not of royal blood. She was a commoner, a lowly seamstress from the Etablissements Desgrez factory, where 200 workers had chosen her as their queen on 1 August that year. The young lady was selected for her beauty, her conduct and her work ethic.

An inspirational muse, Renée Kuntz embodied the female worker and symbolised the triumph of an industry that had enjoyed spectacular success – an industry that rightly deserved to celebrate its achievements at an event that transcended social divisions. The hosiery festival and the crowning of the queen would continue, at irregular intervals, until 1938. 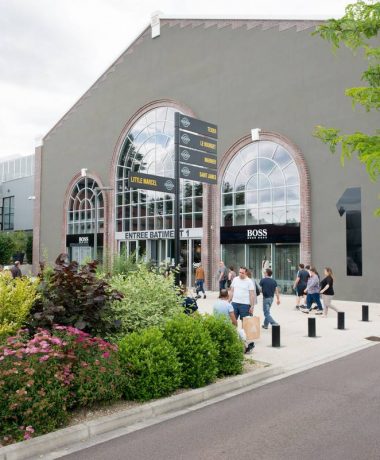 The battle of the brands 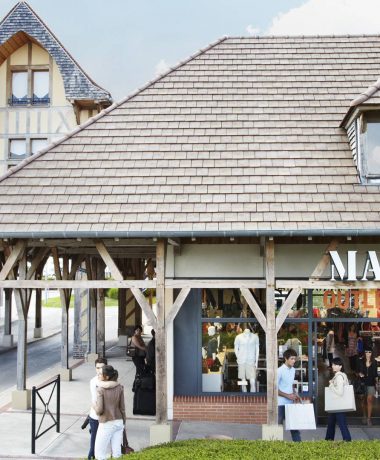 Troyes, the queen of shopping

Chimneys against the Troyen sky