The hazelnut tree, very present in our region, has to face climate hazards and fight against its faithful enemy, the balanin, in order to reach maturity.

The Earth is governed by a force that turns around at about 1700 km/h (at the equator) and carry us into space following a cycle of seasons, solstices, and equinoxes.

Simultaneously, other events take place from the beginning of winter : whooping cranes leave for Spain, peacock butterflies hibernate, blackbirds enjoy the climbing ivy berries and winter under its leaves, and the field cricket, resting in its burrow, undergoes its metamorphosis.

And another event adds up to this apparent winter inertia, along the Aube departmental roads.

The hazelnut tree, friend of the dowser

Indeed, while we drive, we can see behind our car windows a plant present along the roadsides. The breeze moves its pollen pendants, long and thin, loved by the deers. It is the hazelnut tree, from which the Y-shaped rods were used by the village dowsers to detect underground water sources.

Present on Earth for millions of years, a big amount of hazelnut shells have been found in prehistorical habitats because this fruit was much sought by men for its nutritive and stimulating characteristics as well as because it was much easier to digest than its cousin, the walnut.

The yellow pollen, which is the male element of its catkins, flies away when it is windy to land on the ovaries of the female flower of the shrub. Once fertilized, it produces the hazelnut in September, the only fruit contained in a woody shell and harvested in the wild for human consumption in the famous chocolate spreads.

To become a hazelnut is not that easy and it requires a great deal of wonderful events to succeed, because the balancing interactions between animal and plant species are complex and subject to dangers.

The balanin, bond to the hazelnut

Indeed, a 4 mm female insect watches out for this fruit : it is the hazelnut balanin mentioned by Jean-Henri Fabre in his famous Souvenirs Entomologiques (Entomological Memories) (tome 7).

This insect pierces a hole in the still tender green hazelnut with its drilling-like rostrum, carried on its head. Then, it turns around after mating, and lays an egg with its ovipositor, which it deposits inside the heart of the hazelnut.

Soon after, a voracious worm is born and finds there a shelter as well as food by biting the almond. Then, it takes off this cell by piercing a 2 mm hole in the wood of the hazelnut once again, with its mandibles, before it pupates at the foot of the plant, in a burrow that it builds carefully.

During two to three winters, a fabulous alchemy happens that metamorphoses this worm into a perfect insect, called balanin, that finishes its cycle on the hazelnut tree to lay its egg once again in the fruit, and complete the animals and plants dependency.

How to not get amazed by so much marvels and wonder about these interconnected existences, surrounding us silently, and that might, perhaps, disappear entirely! 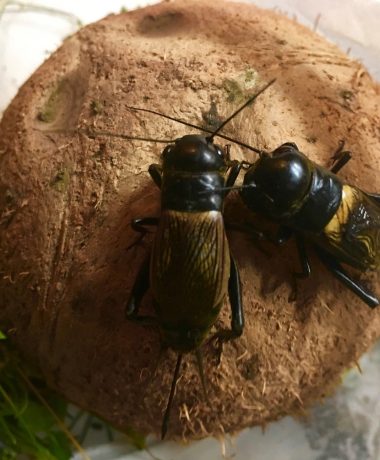 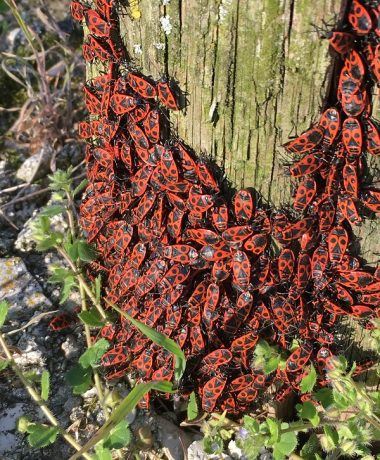 The firebugs under their linden tree