The importance of women in literature has sometimes been hidden through literature history. Indeed, very few women are famous for their writings, and female characters have sometimes appear rather caricatural and not very diversified. However, there is one character, with a historical origin, who has been know as a strong and unique figure through the history of literature : Joan of Arc.

She was born in Domremy, in the Vosges mountains, in the 15th century. Joan of Arc has become famous for guiding the French army against the English army, until the coronation of King Charles VII, in Reims.

« Jehanne the good woman from Lorraine »

Joan of Arc was already famous for her war adventures when she became a major    literature figure, from historical stories and chronicles about real events to totally creative works.

François Villon, a poet, wrote a poem in 1461 to give a tribute to the heroines of the past centuries, the women who managed to rise up and establish themselves in the world.

In his poem « Ballade des dames du temps jadis » (« Ballad for the women of the past »), he evoked French women like Héloïse, Berthe au Grand Pied, Béatrice, and finally « Jehanne la bonne Lorraine qu’Englois brulèrent a Rouen » (« Jehanne the good woman from Lorraine that the English burnt in Rouen »).

François Villon, a poet of the late Middle Ages, chose to write a short form of poem with Joan of Arc as a character, rather than a long novel as they were written back then, in verses and with a regular number of syllables. In the Middle Ages, poetry was closely linked to the political situation in which the poet was living. Poets were evolving at the courts, with powerful men.

For example, Charles d’Orléans, another famous character of the Hundred Years’ War, mixed his influences. He was prince and poet, King of France but also a fine writer. Raised and imprisoned by the English, he wrote about how much he loved and missed the kingdom of France.

Therefore, the presence of Joan of Arc thirty years after her death in the poem of Villon is not surprising. Then, as people of these times started to forget the real Joan of Arc, she became a mythical figure, a character made immortal by literature.

« I am ready ; here is my sharp sword », Shakespeare, Marlowe, Greene

At the very end of the 16th century, the greatest British playwrights took up the legend. With an English point of view, Joan of Arc can easily be considered as a tragic heroine.

She was the daughter of a shepherd, guided by the Saints, who managed to lead an entire army successfully and repel the English invader. She was finally betrayed by her own camp, sold to the enemy and burned as she was barely twenty years old.

However, in the play Henry VI, probably written by several playwrights of the enemy camp, including Shakespeare, Robert Greene et Christopher Marlowe, she is described according to the image she then had in England. Therefore, she is mostly seen as a warrior.

Like male warriors, Joan fights an wins battles. The play tell the battles of the Hundred Years’ War from an English point of view, analyzing French war strategies while England was sinking into the « War of the Two Roses », the civil war.

Thus, Joan of Arc is portrayed as the enemy warrior, a really powerful witch. This is another facet of Joan of Arc that appeared as she became this fictional character. The historical character of Joan of Arc was used and took new shapes text after text, each time she was the subject of a work of art.

« Joan, shattered, admires, dreams, thinks. To love a donkey and lose her cherry! »

Let’s go back to France where Voltaire wrote a long poem of twenty-one chants with dedication, for more than thirty years, entitled « La pucelle d’Orléans » (« The virgin of Orlean »). He started this project in 1730 and did not finish it before 1761. It was then the subject of many attempts at censorships, and pirate versions circulated illegally.

This text was considered terribly scandalous, because it mocks Joan of Arc, this already modified by literature character. It even imagines a relationship between her and a donkey. This Joan of Arc is portrayed as a naive and rather stupid girl. Right at the opposite of the one of Shakespeare !

The Mystery of Joan of Arc’s charity

Charles Péguy was another author for whom Joan of Arc was a key figure. Charles Peguy was a writer and poet at the end of the 19th century and beginning of the 20th century. Joan of Arc was, for him, a strong and inspirational symbol in many writings, both in prose and verse.

He was really inspired by medieval literature, especially by the « mysteries », some short plays about biblical episodes. These were useful to people unable to speak latin, the church language, nor to read. His texts were full of the topics of those times.

In Charles Peguy’s work, the expression of a profund and intimate Christian faith is especially noticeable, with catholic meditations giving a sacred feeling.

Joan of Arc, an uncommon  character for her times, with a strong and respectable faith, able to establish herself beside all the details that were against her (and particularly the fact that she was a young woman of peasant origins), has inspired the poet throughout his life and career. Unlike Voltaire, Péguy wrote about the Virgin of Orleans with much respect and deference.

Moreover, Charles Péguy was born in Orleans, which is a symbolic place linked to the legend of Joan of Arc. It obviously created a strong bond between these two characters, despite the centuries between them.

However, Joan of Arc figure can take multiple shapes and be interpreted in various ways. Therefore, on the other side of the Rhine, Bertold Brecht, a major playwright in the first half of the 20th century, wrote « Sainte Jeanne des Abattoirs » (« Joan the Saint of the Slaughterhouses ») in 1931.

Writing against the capitalist and industrial society that was enforcing, Bretch made of the armed warrior a unionist fighting for the workers’ cause.

He renamed her Joan « Dark » for the occasion and portrayed her in the context of the first financial crises, after 1929, when nationalist and populist movements emerged, while Mussolini and Hitler got closer and reached the power.

Thus, Joan of Arc’s environment  totally changed, but she still was a fighter, a symbol for hope, against injustice, misfortune, oppression, even in an absolutely different socio-political context from that in which the real Joan of Arc had lived.

Therefore, literature was a great source of inspiration for all the writers, throughout the occidental world. Indeed, Joan of Arc even crossed the Atlantic Ocean thanks to Marc Twain, Tom Sawyer’s writer, who wrote her biography.

It is definitely not a unique and unchangeable Joan of Arc that we can discover, but rather a true historical figure, now part of literature, and able to represent a multitude of voices, from every period of time, every environment and origin.

Thus, even if there was no portrait or visual representation made in the lifetime of Joan of Arc, literature opens up a very large panel of representations, sometimes beyond the historical figure, major in French history but also in Troyes.

Indeed, in July 1429, Joan of Arc led the siege of the city of Troyes in order to take it back from English domination.

Joan of Arc wrote a letter to the Trojans, her « Dearest and good friends », to ask them to surrender. After she conquered the city, the « Virgin of Orleans » continued on her way to repel the invader.

Traces of Joan of Arc’s path are quite rare, often in the form of testimonies. A plate fixed on the Troyes’s Saint-Pierre-Saint-Paul Cathedral wall  witnesses retrospectively Joan of Arc’s passage in Troyes.

However, in the exhibition « A King for two crowns », at the Hotel-Dieu-le-Comte, it is now possible to admire one of the three authentic copies of Joan of Arc’s signature, which are the only direct written records of the existence of Joan.

The exhibition celebrates the six hundredth anniversary of the signing of the Treaty of Troyes. In 1420, the Treaty consecrated Henry V’s son as heir to the kingdom of France, after his wedding with Catherine de France in Saint-Jean-au-marché church of Troyes.

From the signing of this Treaty, the Exhibition also recalls the history of the Hundred Years’ War, showcasing exceptional objects that used to belong to the different characters of this time, among the chiefs and kings as well as among soldiers.

Through all the creative reinterpretations made about Joan of Arc in literature, she could then appear as a changed, reinterpreted, reoriented character, re-invented by the writers themselves.

However, she acted in such a significant way that she could influence the course of History, our own History, from which the world could follow his course until today.

It is then very important to take this opportunity to see a original text signed by Joan of Arc to understand that she is not as far from us as we could imagine. This is how History is valued as it deserves to be, and truly it is not less fascinating than fiction. 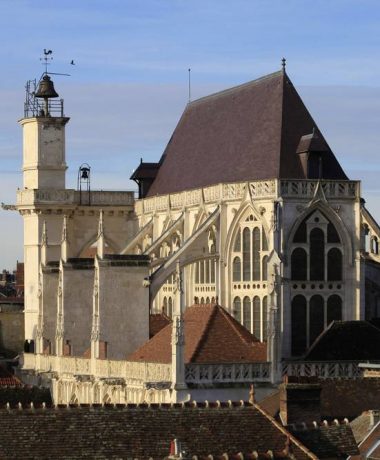 The shameful treaty of Troyes