This neighbourhood is located in the fortified part of the Gallo-Roman city of Augustobona Tricassium (the castrum), whose ramparts were built during the second half of the 3rd century AD to protect the city from Germanic invasions.

Since stone was not abundant in the region, stone from Roman buildings was re-used to build a square rampart measuring 400 m per side. These walls enclosed the Christian centre of the city as well as the château of the first Counts of Champagne (the present site of the place de la Tour). The city is crossed from east to west by the decumanus maximus (today’s rue de la Cité, which is now 3 m higher than at the time) and from north to south by the cardo maximus (today’s rue de la Tour and rue Boucherat).

Starting in the 12th and 13th centuries, under the sponsorship of the Counts of Champagne, the city expanded outside these walls and developed southward and, especially, westward, taking on its shape of “Champagne Cork”. At the time there were 12 churches and two convents in the city.

Starting at this time, social, commercial and cultural life shifted westward to the « corps du bouchon » (body of the cork).

In this neighbourhood, many old buildings have been preserved or rebuilt, such as :

and many half-timbered houses such as the Pont-Ferré house on the square des Trois-Godets, the Hôtel du Chaudron as well as the former Cordeliers convent in the old Jewish quarter. 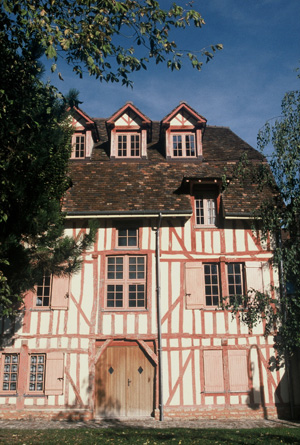