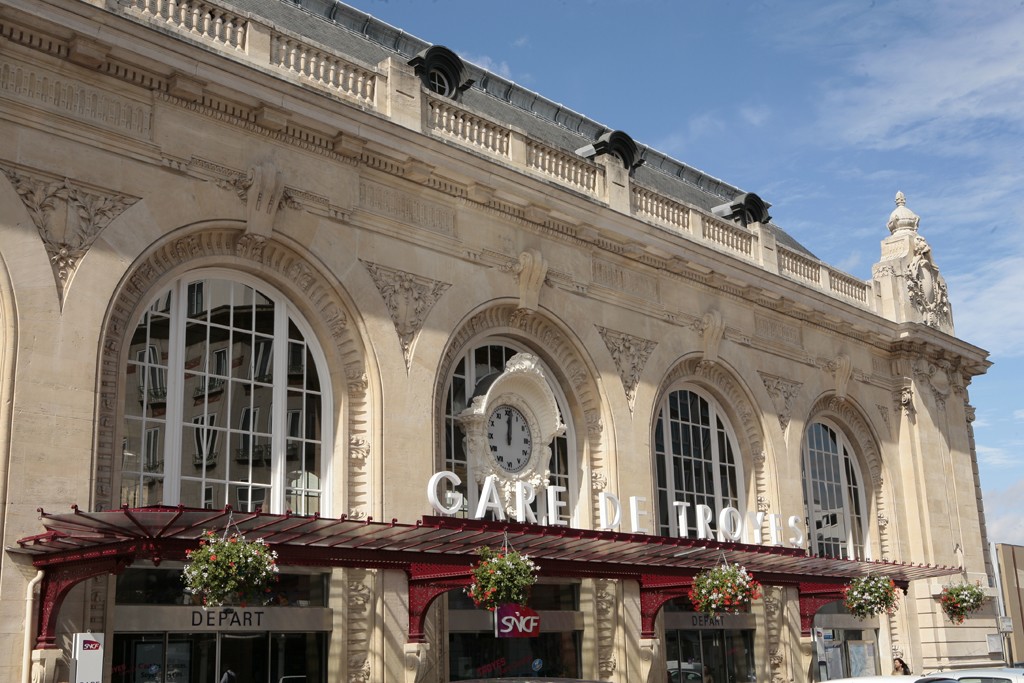 Here we are, just outside the «bouchon de champagne» (champagne cork) Troyes’ historic centre. Around 1850, the Chemins de fer de l’Est railway line (Paris-Troyes-Mulhouse / Belfort) included a section that went around the city centre. The rails were laid on the ditches outside the old ramparts, near the Ravelin reservoir, and a new station was built in 1857-58 to replace the «Embarcadère», the terminus of the old Troyes-Montereau line (the present-day cultural centre Espace Argence).
The salle des pas perdus (waiting hall), anda ticket office are on the ground floor; the middle floor is housing the station master. A goods hall, shops and sheds for 28 cars, two engine sheds, each able to house 15 engines, make up the facilities along the rue des Noës.
Railways underwent a boom and the Compagnie de l’Est invested heavily. Two new metal-frame engine sheds were built at La Chapelle-Saint-Luc, and the remaining space was enough to build four platforms serving seven tracks. The construction works for the grand hall covering them started in the summer of 1894 and attracted curious crowds, fascinated by the audacity, size and originality of the construction using metal structures and glass.
Fourteen vertical supports were used for a single span over a length of 132 meters (6,413 m2).
The façade of the train station, listed as a historical monument, consists of an alignment of sections with semi-circular arches topped by a balustrade reminiscent of the razed fortifications. In the centre, the indispensable clock is finely sculpted. The entrance is decorated by a large wrought-iron station canopy by Gustave Eiffel’s team. A new neoclassical passenger hall was built onto the front of the station in 1912.
In 1982, the station was renovated and a modern wing was added. The most recent restoration took place in 2003.